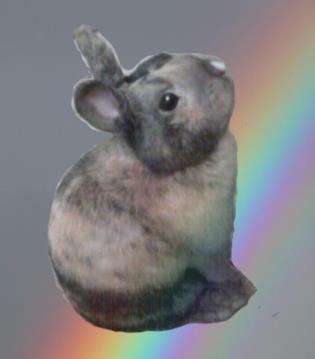 On October 21, 2011, Stefanie lost her precious heartbun, Baby Gizmo, after approximately six and a half (6-1/2) years.  Baby Gizmo was a Harlequin/Dutch-mix with a little white nose and he was such a beloved bunny that he left a giant hole in Stefanie’s heart after he had to leave for the Rainbow Bridge.  In her grief, she looked for a way to fill the huge void in her broken heart.  After looking at rescue bunnies on a few online adoption sites, she decided that she wanted to help other bunnies who had never known the love that Gizmo did.  So, she began fostering bunnies for a couple of years…and as time went by, Stefanie noticed a certain bunny, one that she had previously fostered, who kept getting returned due to her red eyes and sassy attitude, the oh-so aptly-named, Stormy, who was a Dwarf/Himalayan mix, and Stefanie decided to adopt her.  Stefanie usually prefers to be more behind-the-scenes to give her other Board members and volunteers a chance to shine in the spotlight, but a lot of the wonderful things that TBHRR has done would have never been possible without her many years of rabbit knowledge, plenty of on-the-job training, appreciated advice from the bunny experts at the Georgia House Rabbit Society, and her secret rabbit-whispering skills!  Stefanie and Melissa had a few ideas and they helped convince Amber, a Licensed HRS Educator at that time, to form a new house rabbit rescue with Amber at its helm as its President, and Stefanie, an HRS Educator-In-Training at that time, as its Vice President, in the Winter of 2013.  After a ton of paperwork and a collection of monetary donations, TBHRR was incorporated as a Florida Not-For-Profit Corporation effective as of January 1, 2014 and received its designation as a 501(c)(3) public charity effective as of January 3, 2014.  Stefanie has been a Licensed HRS Educator since 2014 or 2015 and currently serves as TBHRR’s President, Board Chair, and will always be a Co-Founder of TBHRR. 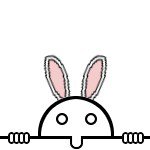 Wonder how you are reading all of this awesome info? That would be because of Jack!  Very technically-inclined, Jack is the one of the reasons why we have a website, and can do Bunny Basics presentations on the run. He’ll put a picture of himself up just as soon as he figures out how to operate a digital camera. Jack currently serves as our Treasurer and he has finally obtained the esteemed status of a full-fledged Licensed HRS Educator!

Diana with Sunny and Ozzie

Diana is our magnificent Secretary.  Her enthusiasm, energy, creativity, and love of bunnies is boundless!  Diana has three (3) house rabbits, a bonded pair, Ozzie and Sunny, plus Temmie (her foster failure adopted from TBHRR).  Sometimes the bunnies will interact as a trio and other times, not so much.  Diana is currently an HRS Educator-In-Training for one year until she obtains her official HRS Educator’s License.